Modern two-stroke engines for mobile applications are characterized by economic and environment-friendly operation. Design, weight and engine characteristic are optimized for the respective operating conditions.

Electronic engine control components are widely used to increase power output and reduce exhaust emission. The complex testing in development and production is carried out at a rotational speed up to 15000 rpm. This requires very fast data acquisition and high online evaluation capacity for large data amounts.

The electronic ignition module of a single cylinder two-stroke engine undergoes testing over the whole engine revolution speed range. Start-up and shut-down situations as well as dynamic load changing during normal operation are considered.Variations in rotational speed, drifting of ignition timing or the missing of entire ignition pulses have to be reliably detected and recorded.

False ignitions as a consequence of undesired crank shaft oscillations during engine shut-down are of particular interest. Additionally, the interface of the electronic engine control unit is evaluated once per revolution in conjunction with the measuring data.

These requirements are a challenge for the data acquisition system regarding time behaviour and process response times. ADwin systems are optimized for real-time applications down to the microsecond range as they are equipped with a dedicated real-time CPU for data processing and data transfer to the PC or peripheral devices. The system concept not only guarantees process response times down to 300 ns it also allows the easy programming of deterministic real-time applications with ADbasic. ADwin systems are well suited for the use in fast engine test stands and data acquisition with angular synchronism e.g. via external trigger signals.

For the two-stroke engine test stand the incremental encoder at the crank shaft delivers the trigger signal for data acquisition. The analog and digital inputs are acquired synchronously to each degree and processed immediately for detection of limit values. The engine speed varies between 0 and 15000 rpm which means the maximum sample rate reaches up to 100 kHz. For each crank shaft angle degree, the ADwin system ensures the exact and traceable relation in time of all measured signals. 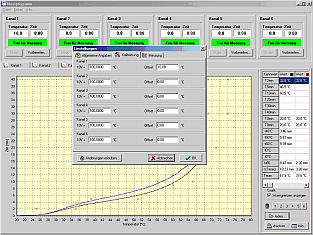 The graphical user interface for the operation of the testing procedure is designed according to the customer's specifications. The use of Delphi® leads to a modern look-and-feel and an intuitive usability.

The operator choses between different testing modes and sets the calibration parameters. At the end of the testing procedure the measuring data can be evaluated in various grafical representations. The entire data sets can be saved in the DIAdem® data format for further offline evaluation.

In the described application, the ADwin system acquires the signals of the encremental encoder via two counter inputs and calculates the angular position and the instantaneous rotational speed. The counter module operates with a time resolution of ±25 ns being increased by averaging over both counter results. Thus, even very small fluctuations in rotational speed become visible.

First tests in the development department showed unexpected higher frequency oscillations in the rotational speed signal. Investagation of this previously unknown phenomenom revealed the mechanical connection of the encremental encoder inducing this effect. Changes in the mounting principle led to significant reduction of the fluctuations. If necessary, the measured rotational speed values can also be smoothed by averaging or low-pass filtering in ADbasic.

The easy programming in ADbasic and the precisely determistic ADwin time behaviour give a precise insight ino the tested components and finally allow important improvements with only small changes in design.

Dynamic perspectives for the future

In the meantime, the manufacturer uses several identical ADwin systems for the development of new engine technologies. This covers highly dynamic short time testing as well as online monitoring for endurance tests including serial or bus communication. As a flexible and efficient tool, ADwin helps in product optimization.

With the modular design of the ADwin system, additional signal can be integrated into the test set up at any time. By continous further development, Jäger Messtechnik GmbH ensures the availability of optimal problem solutions with ADwin.